(and they’re all true)

Obama opts out of public funds against McCain

Wanna know why I am against private funding of elections?  Go to Just6Dollars.org.

I know that I should at some point sit my ass down and write a real blog post, but the fact of the matter is, I’m probably not going to right now. I’m happy, there’s not much going on, and I don’t feel that the world cares enough about my rambling thoughts to write something out of nothing. So, here goes with some randoms of teh interwebs for your viewing pleasure:

A cat that is also a hedgehog? Sign me the fuck UP!  From Nebogirl.

I don’t know why, but this one was I Can Haz Cheezburger a few weeks ago, and it’s made me giggle at least once a day since then.  Apparently I need an injection of Kids In The Hall, stat.

Suzanne from CUSS teaches me something I desperately needed to know:  There is a musical called Co-Ed Prison Sluts.  Must.See.

Fat, genes, and environment  by fillyjonk

Fat is a symptom, not a disease, Part One: Medical Malpractice on a Victorian Scale by RioIriri

I am a person, not an epidemic. by RioIriri

A rant by jamboree

Fat lot of good it’ll do ya. by (author unknown)

Time to restate some basics by TR

Pictures, words and all that. by jamboree:

Fifth, Things I Want To Make

Let’s Get Clean and Healthy: Herbal Housekeeping by Christine

HOWTO make a cardboard playhouse by Cory Doctorow  (For Paige and Alice, of course!)

Sixth, Memes I Have Been Saving And Will Now Do

The Anti-“Sex and the City” Meme by Suzanne

What’s the cheapest pair of shoes you own?: I honestly don’t have many cheap shoes anymore – since I have such pressure issues with my feet, I have determined that I will just suck it up and pay what it takes to have shoes that fit and aren’t uncomfortable.  That being said, I did just score a pair of Naturalizer brown sandals (up yours, they’re comfortable) at Marshalls or TJMaxx or something for $25.  I ❤ them.

What’s your favorite piece of jewelry, if you own any?: My wedding rings.  While I heart my wedding ring, I miss being able to wear my engagement ring with it (I have developed some sort of freaking rash under there that my ring pisses off.  I’m lotioning like a fool to get it to go away).

What’s your favorite t-shirt?: My Emily the Strange t-shirt: it says  Emily has a mind of her own and shows her dissecting a brain.  Now that I think of it, I need to find that t-shit.

If you could wear jeans every day, would you? Pretty much, except during the summer when it’s too warm.  I don’t mind a pair of capris or a skirt.

Do you comb your hair every day? Kind of?  I mean, I run the brush through it to make sure it’s not tangled before I dry it, but I never touch it again.

The Friday Five, stolen from Christy

“With the following phrases, post a single image of the strongest thought/idea that pops into your head.” 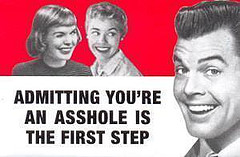 If songs were put to PowerPoint by p2

Why Bush Quit Golf: The Iraq War by Technology Expert

This is America by Davezilla

In which it is scientifically proven that I am a shitty wife: 1939 marital rating scale for wives by Mark Frauenfelder

Eighth:  Overheard (I only wish by me)

I Thought There Was Just Solid, Liquid, and Gas? on Overheard Everywhere

(funny only because I actually went to Mankato State!)

Would You Mind Taking a Picture Of Us With It? from Overheard Everywhere

[A young woman in a wetsuit and a young man in normal clothing are standing near the packaged meats.]
Female employee: Can I help you with anything?
Young woman: Oh, no thanks, we’re just admiring the bacon.
Female employee: Oh. Okay! Have a nice day!

Bring a bib (Overheard in Chicago). by Ziggy

Co-worker made to apologize to client: I’m sorry I didn’t have you on hold when I called you an asshole.
Marietta, Georgia

Please flush ALL the poo down.

I rarely have a fashion issue, but I’m afraid I do now.

I’ve been looking at all sorts of cute skirts (I have given up pants for the summer – they just don’t fit right, and I hate them). And while I like all the ones that I have, I think that I would like some longer ones.

Here is the issue that I am having: a lot of the cute summer skirts that I am seeing would look best with a white shirt.

This mostly comes from the fact that I have almost always had to pay for laundry in my adult life, and learned to shove as many clothes in as possible. Therefore, I don’t sort. Ever. If I bought white things, they would get all dingy. So, I just didn’t. Not a big deal.

But now I am thinking about letting white back into my life. Which would mean not only being able to wear all sorts of cute things on the bottom half of my self, but also that I would have to sort laundry.

Ok, I know this is not the biggest problem that anyone can have. But, frankly, I hate doing laundry, and the less effort I have to put into it, the better.

So, what to do? Do I put on my big girl panties, get some white tops and just learn to sort and love it, or do I just forget it and keep with my drab wardrobe?

Again I Thank You, Federal Government

When did the government decide to take the money? Yesterday.

How is it that if I had paid late, I’d be paying through the ass, but they can take the money whenever they damn well please? (And right before the mortgage payment, which just made everything better).

*They rejected because the name on my taxes didn’t match the Social Security card – which I knew, as I have completely forgotten to take care of that. They rejected again because, after 33 years, the SSA has decided they have the wrong birth date on file for me. Yay.

Next Page »
Di Has Stories…
Create a free website or blog at WordPress.com.